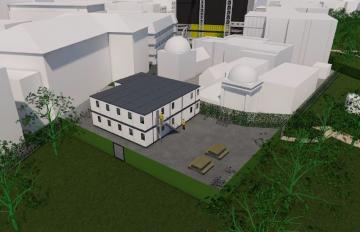 From Monday 18 March, a temporary modular structure will be built along the southern boundary between the Science Area and the University Parks, after being granted planning permission and securing the agreement of the Curators of the Parks.

The two-storey building will provide essential welfare facilities for people working on the Biochemistry Completion project in the Science Area. It will be in place for around two years, occupying the space usually taken up by the Parks team’s plant nursery. After its removal, there will be a major project to redevelop this area of the Parks.

There will be some disturbance to users of the Parks during installation of the temporary building due to the access requirements for this project – a process that is expected to take around one month – but every effort will be made to minimise disruption, and to avoid damage to trees, pathways and the general fabric of the University Parks.

Once construction is complete, workers will access the facilities directly from the Science Area, so there should be no further impact on Parks users until the modular building is removed. If you have any queries or comments, please contact the University Parks team.